Within the next four years, the focus of the LRA INFECTIONS research will be on the spread of antimicrobial resistant microbes in an increasingly urbanised society. The highly interdisciplinary and collaborative research agenda of the 18 participating Leibniz institutes and three external partners enables the development of long-term synergies to advance current knowledge, contribute to the development of countermeasures and provide policy recommendations.

Altogether six projects, the so called Interdisciplinary Project Teams (IPT1-6), which will be worked on over the next four years through the combined and multidisciplinary expertise of the project partners, span natural, agricultural and urban areas. Among other things, the influence of water, different fly species and containment measures in hospitals on the spread of pathogens will be investigated.

The focus of this funding period is a virtual transect - an imaginary line along which measurements are taken or samples are taken at various points. This transect includes agricultural, natural and urban habitats along which the projects are aligned (see figure). 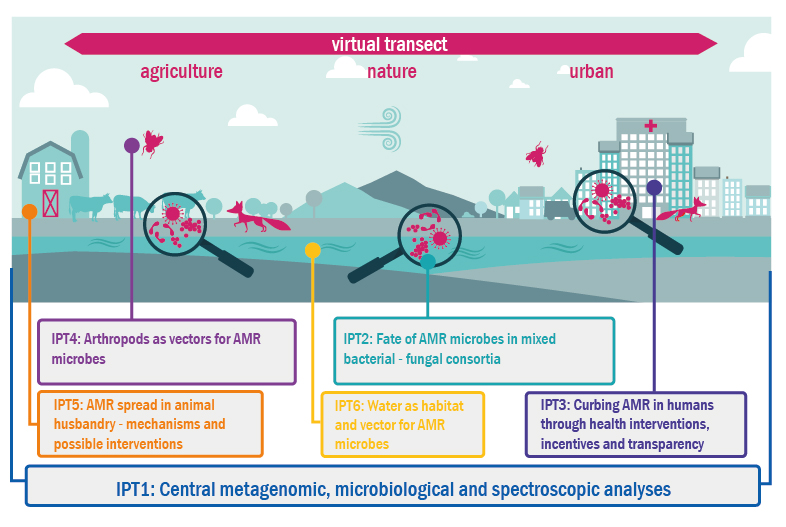 Our central objective is to understand the spread of antimicrobial resistance (AMR) between livestock, the environment, and humans. Within the Leibniz Research Alliance INFECTIONS, IPT1 serves as a central hub for bacteriological, molecular biological and spectroscopic identification of AMR bacteria and for bioinformatics analyses of large-scale genomic sequencing data. Metagenomic sequencing of DNA from samples collected within the other IPTs will provide cultivation-independent information on the diversity and abundance of AMR microorganisms. We will combine short-read and long-read DNA sequencing, specific bioinformatics pipelines and public databases to identify antibiotic resistance genes and mutations. Subsequently, specific AMR of interest (e.g. common resistance genes) will be traced across a larger number of samples by using quantitative PCR. Dilution to extinction in selective cultivation media will be used to isolate AMR pathogenic bacteria from environmental samples. Bacterial isolates will be tested for their antibiotic susceptibilities and their cell responses to antibiotics will be characterized by using Raman spectroscopy. Further, the genomes from selected bacterial isolates will be sequenced to track the sources of environmental AMR, such as from flies (IPT4), hygiene studies (IPT5) and open waters (IPT6).

Antimicrobial resistance (AMR) is becoming an increasingly urgent concern in our world. As more and more microbes develop resistance to antimicrobials, infectious diseases which were commonly able to be treated, become more difficult to deal with. As part of Interdisciplinary Project Team 2 (IPT2) we are primarily focused on microbes which may cause infections of the lung and are well known to develop resistance to antimicrobials. These infections do not usually occur in healthy people, but can occur in those having problems with the immune system or those who suffer from lung conditions, such as cystic fibrosis. Often these microbes do not cause infections alone, but form highly-structured polymicrobial communities, known as “biofilms”. In view of high cell densities and species diversity, it is not surprising that physical and social interactions within mixed biofilms may lead to cooperation or competition between the cells, which in turn may result in remodelling or even evolution of the members of the biofilm community, including the development of antimicrobial resistance to name just one possible outcome of microbial evolution. It is therefore extremely important to understand how the microorganisms evolve and adapt to new environments in mixed biofilm-forming consortia, given the rapid development of antimicrobial resistance and the consequences for the treatment of infectious diseases. Within the framework of the current project we intend to examine the interactions between pulmonary opportunists and arising antimicrobial resistance in mixed biofilms, placing a special focus on bacterial and fungal pathogens affecting cystic fibrosis patients, such as Stenotrophomonas maltophilia and Candida albicans. In order to mimic the conditions of the human respiratory system and achieve the complexity of the in vivo situation in an in vitro model, we will investigate the biofilm communities in physiologically relevant cell culture systems at the air-liquid interface.

The rising use of antibiotics in health and agriculture are driving the increase in antimicrobial resistance (AMR). The increasing use of antibiotics in the health- and livestock sectors along with ineffective stewardship have already led to alarming rates of antimicrobial resistant pathogens – a situation with severe consequences for society. Experts estimate that by 2050 ten million people will die each year from common infections that will then be no longer treatable. The central objective of this research project is to support optimal patterns of antibiotic use worldwide. The focus of this project is on two areas in particular: One, reducing the excessive use of antibiotics and two, promoting equal access to quality antibiotics. The excessive use of antibiotics stems from two sources: A lack of stewardship, standards and controls of medicines, and a lack of diagnostic tools that allow distinguishing between bacterial and viral infections – an information essential for treatment that is effective. Hence, this project will assess the role of better diagnostic tools, more information and transparency for curbing antimicrobial resistance. It will assess the cost-effectiveness of a variety of measures and interventions at the micro- and the macro level and provide concrete policy recommendations.

The project focuses on vector ecology. Vectors like filth flies are able to transport and disseminate various pathogens including bacteria, fungi, viruses and parasites. The common house fly (Musca domestica) can transport bacteria over distances of 5-7 km. It breeds in and feeds on decaying organic matter and animal feces. Due to this coprophagic behaviour bacteria may be ingested and can later be transmitted onto human food by regurgitation and defecation. The frequent preventive use of antibiotics on farms and in lifestock production leads to the emergence of antimicrobial resistant bacteria. These can be disseminated by flies from farm environments to urbanized areas causing severe nosocomial infections among citizens. To understand the potential of flies to spread bacteria over different landscape types and from farm environments to urbanized areas, a mark-release-recapture experiment will be conducted. For this purpose, adults of M. domestica are captured, marked by different colours with a permanent dye and released again. The recapture rate will be determined using specialized dipteran traps. The results will help understand the flight range and the habitat binding of the muscid. Strategies to prevent and inhibit the spread of antimicrobial-resistant bacteria by flies will be elucidated. In a further step, the persistence and multiplication of these bacteria in the flies will be investigated under a laboratory setting. The three larval stages of the muscid fly develop in manure and animal feces where they may ingest antimicrobial resistant bacteria excreted by the lifestock animals. Of special intrest is if the ingested bacteria survive the metamorphosis. This indicates that they can remain in the puparium after histolysis or persist in the newly emerged imagos. Altogether, this project will help understand how antimicrobial resistant bacteria survive and persist during the life cycle of flies and how adult flies transport and disseminate them to urbanized areas.

Within Interdisciplinary Project Team 5 (IPT5) the ATB and partners work intensively together to determine the mechanisms of antimicrobial resistance (AMR) transmission in animal husbandry and to evaluate possible intervention measures. We compare AMR occurrence in typical conventionally grown pigs in a standard and improved hygienic environment (by using insecticides, flytraps, increased disinfection and dusting). In addition, the antibacterial activities of different feed additives will be compared to the basic diet based on microbial colonization in the gut of piglets during the early fattening period. In close cooperation with other INFECTIONS partners, the survival and propagation of AMR microbes in pig faeces, dust and flies under all conditions will be analyzed. The abundance of AMR based on bacteriological methods, PCR and cultivation-independent DNA sequencing will be conducted. With support from other IPTs, the findings will guide interventions and potential mitigation strategies to minimize AMR spread in commercial animal husbandry to reduce potential contamination of the environment (e.g. surface water, when the slurry is used as organic fertilizer on agricultural fields).

Antimicrobial resistance (AMR) has been declared by the World Health Organization (WHO) as one of the top 10 global public health threats in the presence and near future. According to WHO, AMR will have a disastrous impact within a generation unless an urgent and effective global mitigation plan is finally implemented. In a recent study, data from 204 countries suggest a burden of 1,27 million deaths associated with AMR bacteria in 2019. One of the challenges of monitoring AMR organisms and antimicrobial resistance genes (ARGs) is their ubiquitous distribution, i.e. they are generally found in humans, animals, plants, microbes and the environment like water, soil and air. In particular, water plays a key role as a vector and reservoir for AMR transmission across urban and rural areas. Our preliminary results suggest that the abundance of AMR in urban waters and sediments is substantially higher compared to rural water bodies. In addition, rural lakes sediments and water derived from farmlands is observed to be a major source of environmental AMR due to frequent antibiotics use for cattle raising. The approach defined for Interdisciplinary Project Team 6 (IPT6) seeks to provide further understanding on AMR dispersion from WWTPs to the environment as well as to characterize the humanization of urban water microbiomes. In particular, the use of long-read sequencing in this project will allow to recover mobile genetic elements (MGEs) such as plasmids and genomic islands (GIs) and thus a higher resolution in the metagenome assembly. Also, risk assessment will be performed in order to evaluate the environmental exposure to ARGs. The results from this project will allow to directly link frequency and diversity of AMR and the carrying bacteria to other findings and team up with institutions of the Leibniz Research Alliance (LRA) INFECTIONS, providing a broad overview of AMR profiles in different waters and potential disease vectors of concern in the area of Berlin-Brandenburg.